THE INFLUENCE OF TEMPERATURE ON IMAGE QUALITY IN NIR / SWIR CAMERAS

FEBRUARY, 2019
Within the electromagnetic spectrum, infrared radiation is located between visible light and microwaves. It covers a wide spectrum from 750 nm to 14.000 nm wavelength. It is common to separate it into near-infrared (NIR), short-wave infrared (SWIR), mid-wave infrared (MWIR), and long-wave infrared (LWIR). Although infrared radiation in the SWIR region is not visible to the human eye, it interacts with objects in a similar manner as visible wavelengths.
Most SWIR camera sensors are based on InGaAs material and work like silicon-based CCD or CMOS sensors by converting photons into electrons - so called quantum detectors. InGaAs sensors are made of Indium, Gallium, Arsenide based photodiodes and silicon-based read-out integrated circuits (ROIC).
The band gap energy is typically smaller in InGaAs photodiodes than in silicon based pixels. As a result, the dark current is higher at similar temperatures. 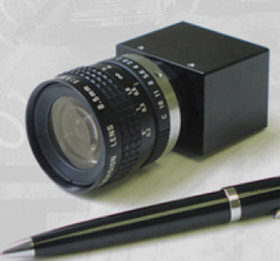 Dark current is current that flows (for example produces a signal) even if no light is hitting the sensor. It is caused by thermal excitation of electrons in the InGaAs material. The absolute value of the dark current can vary considerably from one sensor to another. Dark current increases strongly with higher sensor temperature. As a rule of thumb, it doubles approximately every 9°C.
For example, when the same picture is taken twice with the same camera at 20°C and 45°C sensor temperature, the histograms show very different results. At 45°C sensor temperature the minimum value is higher (0 being black to 255 being white) as well as the average value. At 20°C there are no saturated pixels (max. value 254) whereas at 45°C there are quite a few.

The temperature level influences the spectral sensitivity and the dark current. The dark current has a high impact on image quality (black level and noise). For applications where image quality is important and when operating at the low or high end of the sensitivity curve, temperature control is crucial.
To accurately monitor and control the temperature, all our SWIR Goldeye cameras implement three temperature sensors:
In addition, our cameras provide advanced features to correct and minimize those effects (for example advanced background correction).
To counterbalance the temperature difference between ambient and sensor temperature and to stabilize the set sensor temperature, most of the Goldeye cameras are equipped with a thermo-electric cooling device. Available cooling devices are:
In addition, the Goldeye Cool models enclose the sensor in a Nitrogen filled cooling chamber (for example: Goldeye G/CL-008 Cool TEC1). That protects it from condensation and makes it suitable in environments where condensation is likely to occur (that is high humidity, high ambient temperatures).
ALSO READ: A LOOK AT THE PROGRESSION OF MACHINE VISION TECHNOLOGY OVER THE LAST THREE YEARS
Back to All ROBOTICS AND AUTONOMOUS SYSTEMS ARTICLES, RESOURCES AND NEWS

TO KNOW MORE ABOUT ALLIED VISION INDUSTRIAL CAMERA DISTRIBUTOR IN INDIA CONTACT MENZEL VISION AND ROBOTICS PVT LTD CONTACT US AT (+ 91) 22 67993158 OR EMAIL US AT INFO@MVRPL.COM

Source - WWW.ALLIEDVISION.COM
Posted by Menzel Vision and Robotics Private Limited at 10:30 No comments: